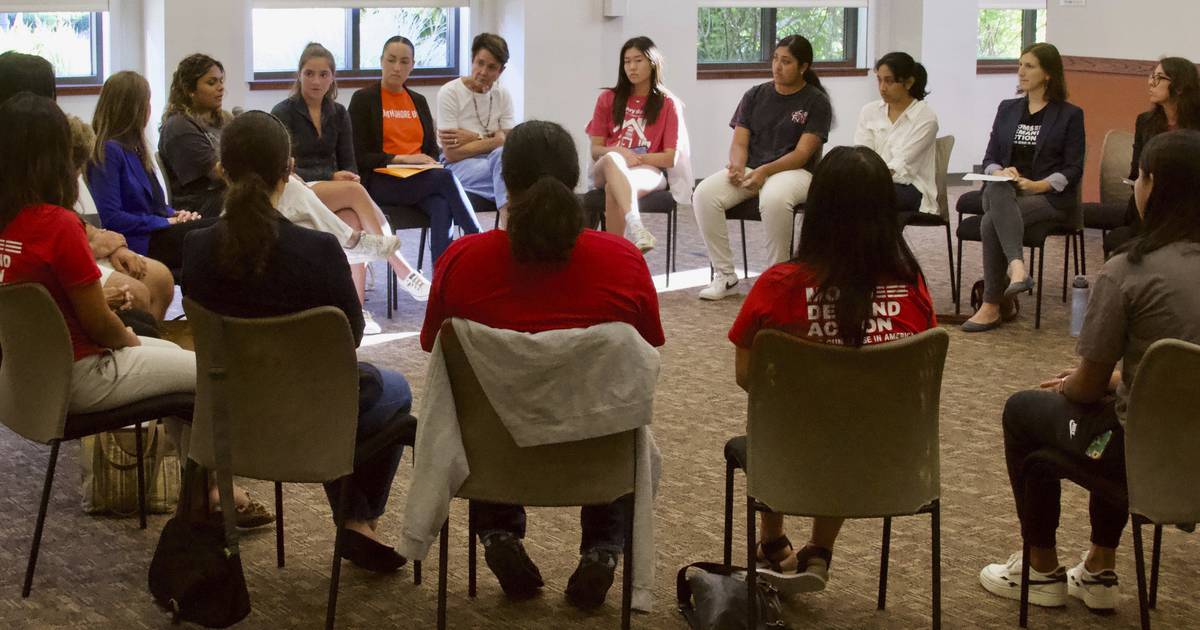 Discussion at Glenview Public Library on the impact of gun violence

“I physically carry the weight that something terrible could happen to our school and so do my parents,” Ball said.

She was one of about 30 people who took part in a panel discussion Sept. 7 at the Glenview Public Library where participants shared what it’s like to live in a time of mass shootings, active shooting ranges and how the threat of gun violence affects lives. . The group included high school students, members of various gun law reform groups as well as U.S. Representative Jan Schakowsky (Ill-09) and Ill State Representative. Jennifer Gong-Gershowitz.

“I’m here to talk about child safety in our schools,” Ball said. “It’s heartbreaking. The last one for me was near my home in Highland Park and to say I was speechless when I discovered it is an understatement.

On July 4, 2022, there was a mass shooting in Highland Park during a 4th of July parade. In this incident, 21-year-old Robert E. Crimo III is accused of killing seven people and wounding dozens more with a semi-automatic rifle his father allegedly helped him obtain just a few months after Crimo threatened to kill himself and resort to violence.

“I didn’t know how to act or how to react,” Ball added. “I couldn’t think. I couldn’t process. How did something so horrible happen so close to me?

The discussion also focused on how federal and state legislation can have an impact.

“We’re not just talking about the mass shootings,” Schakowsky told the group. “These are the daily shootings you see in your communities.”

“On the day of the Highland Park Massacre, more people were shot in the city of Chicago and elsewhere,” she added. “It’s street life in too many places.”

She also said that thanks to gun law reform activists, the House in July passed HR 1808 – Assault Weapons Ban of 2022, which prohibits the sale, manufacture, transfer or possession of semi-automatic assault weapons, as well as high-capacity magazines. The bill bans all semi-automatic rifles that may have a detachable magazine and have a military feature such as a pistol grip and detachable stock or grenade launcher, among other features.

It also prohibits “all semi-automatic rifles with a fixed magazine that can accept more than 10 rounds”. The bill would not ban current semi-automatic weapons that people own, meaning current gun owners would have their guns grandfathered.

“We wouldn’t have passed any legislation without the activists who wouldn’t have given up,” Schakowsky said. “It wouldn’t be happening if it weren’t for the outside pressure, activism and organizing from people like you who are making it happen.”

“He would have sat for who knows how many decades doing nothing about gun violence and gun control,” she added. “You all helped change gun policy.”

Gong-Gershowitz said the State House may be on the verge of passing some very significant gun reform legislation.

“The reason we’re at an important moment in history is because people like the people in this room have, really made sure that we do transformational work around this issue. “, she said. “I believe we’re at a point in the State House where we could get something very, very big and on the governor’s desk.”

The discussion was also an opportunity for members of various gun law reform groups and those interested in gun reform legislation to share information and ideas for strategy in their quest meaningful firearm law reform.

“It’s important that we stand together, that we talk about next steps,” said Jordan Dahiya of Northshore Unite, a community organization dedicated to education and reform initiatives in the wake of gun violence.

“Instead of just coming here and having conversations about these tragedies, we’re really motivated and deciding on next steps and we have a plan in place to create the America we want to create for ourselves,” a- she declared.

Brian L. Cox is a freelance journalist for Pioneer Press.