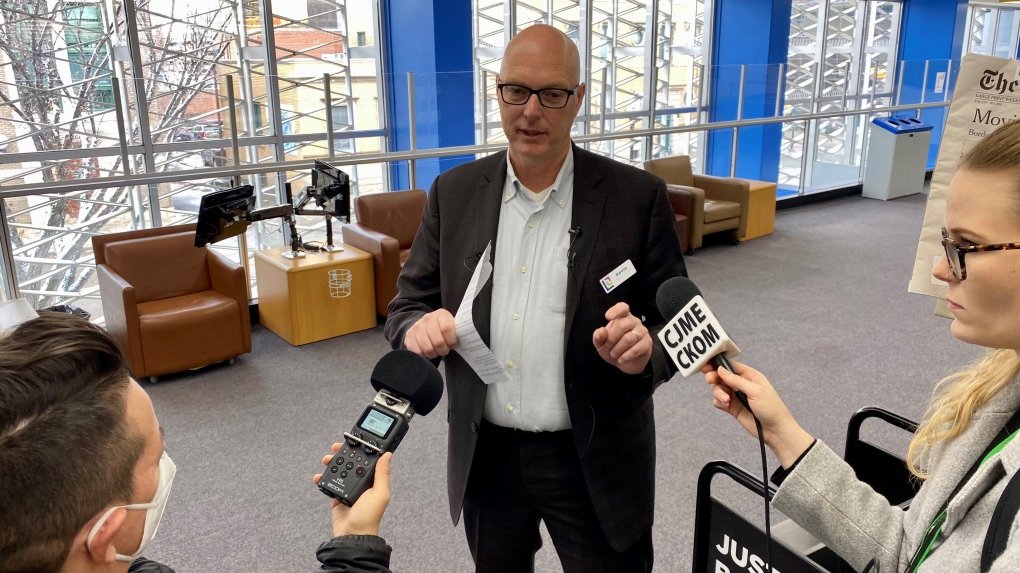 “There are no imminent security issues, but the risk of issues continues to grow,” said Kevin Saunderson, executive director of service innovation at RPL.

The long list of problems begins before visitors even enter the front doors, according to Saunderson.

“The ramp outside the building does not meet current building code,” he said.

Once someone is inside, accessibility isn’t much better. There are three floors in the library with only one elevator. There is no bathroom on the ground floor.

“The elevator is the only accessible way to get to our restroom,” Saunderson said.

“If the elevator breaks down, well those people are surrounded.”

Accessibility is one of the biggest issues to address, according to the RPL board. (Allison Bamford/CTV News)

In addition to accessibility issues, Saunderson said there were leaks in the roof, asbestos in the ceiling and poorly insulated walls.

As for the windows, they were installed upside down to accommodate the sunshades.

However, Saunderson said the biggest problem was the building’s original boilers. Only one is in service at the moment.

“We can heat the whole building with just one boiler. The problem is that these things are so old that it’s really hard to find parts and find someone who knows how to handle the control system,” he said.

These are just some of the issues Saunderson highlighted during a Central Branch media tour on Tuesday. The library offers a similar visit to the public throughout the week.

“We set up the visits to create an opportunity for people on the outside who haven’t been engaged…to give those people a way to better understand what we mean when we say we have issues. with the building,” he said.

The RPL Board of Directors voted to demolish the central branch and rebuild – bigger and taller – in the same location, at the corner of 12th Avenue and Lorne Street. Board members believe this is the best way to meet the library’s needs and ensure its long-term growth and sustainability.

The estimated cost of a new building is $125 million. RPL estimates it would cost $50 million to just bring the building up to code.

“We would live with a lot of problems that we continue to live with today that a new building is about the only way to solve them,” Saunderson said.

The cost and destruction of a heritage building were controversial topics that many objected to during a recent public consultation organized by the city’s catalyst committee.

The catalyst committee is responsible for writing a report with recommendations for the future of the central branch as well as four other major projects.

The report is expected to be presented to City Council in January.