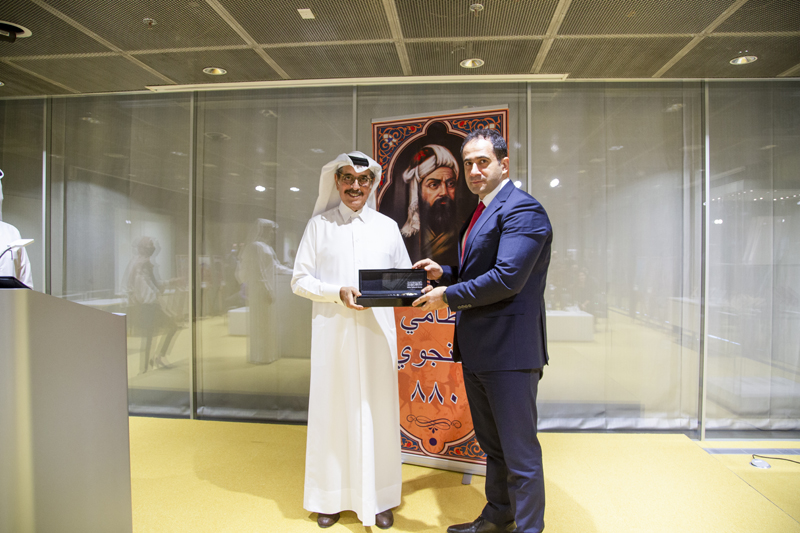 The Minister of State and Chairman of QNL, HE Dr. Hamad bin Abdulaziz Al Kawari, with HE Elnur Aliyev, First Deputy Minister of Culture of Azerbaijan, at the Qatar National Library.

Doha: The Qatar National Library (QNL) and the Azerbaijani Embassy in Qatar recently hosted an event in honor of the great poet and thinker Nizami Ganjavi on the 880th anniversary of his birth. Ganjavi was one of the greatest representatives of the Eastern Renaissance and contributed to the literature and philosophy of the world in his immortal work Khamsa (five), showing the aesthetic power of his art.

The event was opened by HE Dr. Hamad bin Abdulaziz Al Kawari, Minister of State of Qatar and President of the Qatar National Library, followed by a speech by HE Elnur Aliyev, First Deputy Minister of Culture of the Republic of Azerbaijan.

Dr. Mael Yagub, Doctor of Philosophy and Founder of the Azerbaijani Academy of Philosophy and Sociology, also delivered a speech on the topic â€œThe image of the ideal person and its characteristics in the works of Nizami Ganjaviâ€.

On this occasion, HE Al Kawari said: â€œQatar and Azerbaijan have shared years of cultural, historical and religious values â€‹â€‹which have strengthened the relations between the two countries and their people. It is an honor for us to celebrate today the literary work of the great poet and writer Nizami Ganjavi. As a heritage library, we are proud to feature his work and manuscripts in our collections and showcase some of the rare manuscripts we own.

â€œThe Qatar National Library celebrates its vision of bringing people together through literature and poetry, a vision pursued by our belief that culture is the best ambassador of communication between communities. We believe that today’s session will enrich and strengthen our communities with literary and historical knowledge, which has played a vital role in the development of the Arab and Islamic population. We are also happy to present a digital copy of these manuscripts to our friends in Azerbaijan on the occasion of the 880th birthday of the great poet and philosopher.

Elnur Aliyev, Azerbaijani First Deputy Minister of Culture, said: â€œNizami was not only a poet, he was a man of wisdom who focused on humanity, human beings, justice, issues of gender, good neighborliness and the importance of women in society. He said, â€œBeauty is not something you inherit, but something you can achieve and accomplish. Nizami’s work has inspired us in many ways, acting as the bridge between people as they are today and their best versions tomorrow. Its work continues to unite people, nations and cultures across borders. I am grateful for this opportunity to celebrate the 880 years of Nizami Ganjavi at the Qatar National Library and I hope to continue to strengthen our joint efforts in the fields of literature and poetry in the years to come.

The session explored electronic copies of Azerbaijani collections of Nizami’s works, as well as manuscripts, miniatures and paintings inspired by Nizami’s work. The library highlighted some of Nizami’s works which were translated into Arabic by Abdulaziz Bakoush, such as “Makhzan-ul-Asrar”, “Khosrow and Shirin” and “Haft Peykar”.

The library’s efforts to showcase great poets, writers and artists from the region reflect its commitment to preserving and conserving Arab history and culture. Over the years, the region has played an important role in contributing to the fields of art, education, culture and heritage, and the Library honors these contributions as they shape future generations.