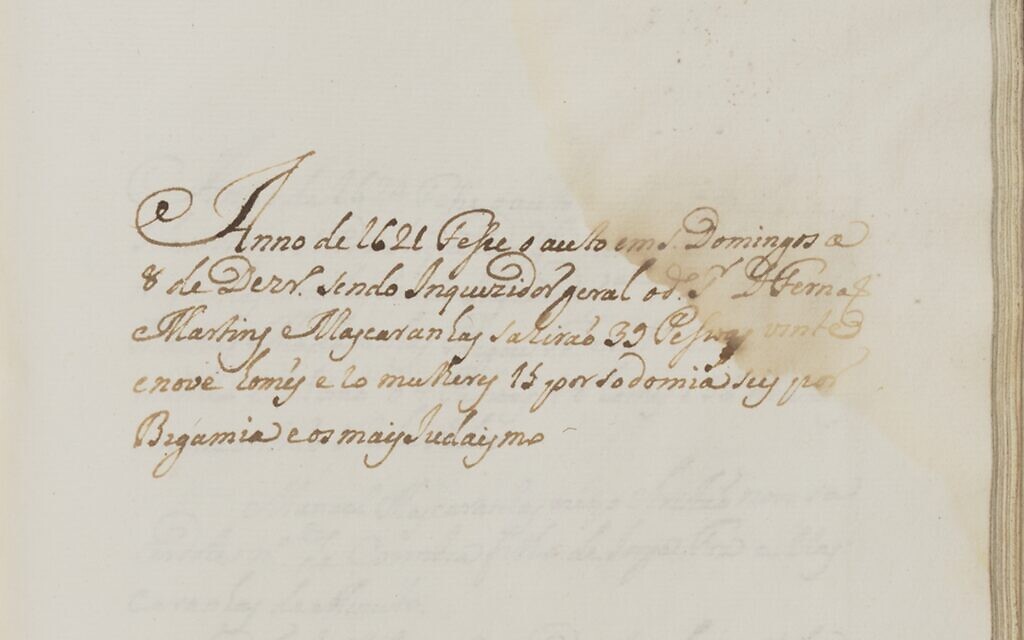 An 18th-century document detailing the activities of the Portuguese Inquisition, which punished people for upholding Jewish traditions and committing other transgressions, has been found by the National Library of Israel and posted online, the library says .

The Library’s Central Archive for the History of the Jewish People on Wednesday released the 60-page document written in Portuguese, which mainly chronicles public hearings and executions that took place between 1540 and 1669, most of them in Lisbon called autos -da-fé, which were carried out by the Catholic Church. The manuscript was found in the library archives.

The victims detailed in the documents were mostly then-recently converted Christians accused of maintaining their Jewish customs, but also included “old Christians” convicted of committing acts of “sodomy, bigamy, possession of forbidden books, and sacrilege.” the library statement said.

The inquisition began in 1536, in response to a wave of forcibly converted Jews crossing the country from neighboring Spain, where they were fleeing similar atrocities. Hearings and executions continued for more than two centuries and were considered acts of penance for the accused. The public performances drew large crowds who came to witness the brutal executions, which included so-called sinners burned alive by the authorities.

Archives director Dr Yochai Ben-Ghedalia said the rare finds ‘shed light on the realities of a complex chapter in Jewish history’ and the rigorous nature of the church’s enforcement of its rules .

“We hope the newly discovered document will help researchers better investigate this fascinating and difficult time in history,” he added.

An illustration of an auto-da-fé in Lisbon during the Portuguese Inquisition, which began in 1536 and was abolished in 1821. (Courtesy National Library of Israel)

The manuscript gives specific details about the autos-da-fé, including the number of victims, dates, locations, and even the names of the priests who spoke at the public performances.

The rituals were finally officially abolished in 1821.

From 2015, Portugal and Spain announced that anyone who could prove they were descended from Sephardim – Jews expelled from the Iberian Peninsula from 1492 as a result of the Inquisition – could apply for citizenship.

In March 2020, the Portuguese parliament approved an annual memorial day for the victims of atrocities, which was held on March 31.

Times of Israel staff contributed to this report.

Israeli cuisine is taking the world by storm. Here is your chance to participate…

The Times of Israel community is thrilled to present our new virtual cooking series, B’teavonwhere world-renowned chefs show you how to prepare classic and modern Israeli dishes.

Learn more Learn more Already a member? Log in to stop seeing this

You are a dedicated reader

We’re really glad you read X Articles from The Times of Israel over the past month.

That’s why we started The Times of Israel ten years ago – to provide discerning readers like you with must-read coverage of Israel and the Jewish world.

For just $6 a month, you can help support our quality journalism while benefiting from The Times of Israel WITHOUT ADVERTISINGas well as access Exclusive Content only available to members of the Times of Israel community.

Thanks,
David Horovitz, founding editor of The Times of Israel

Milwaukee Public Library’s July Book of the Month Pick is ‘A Job Worthy of the Name’ | WUWM 89.7 FM