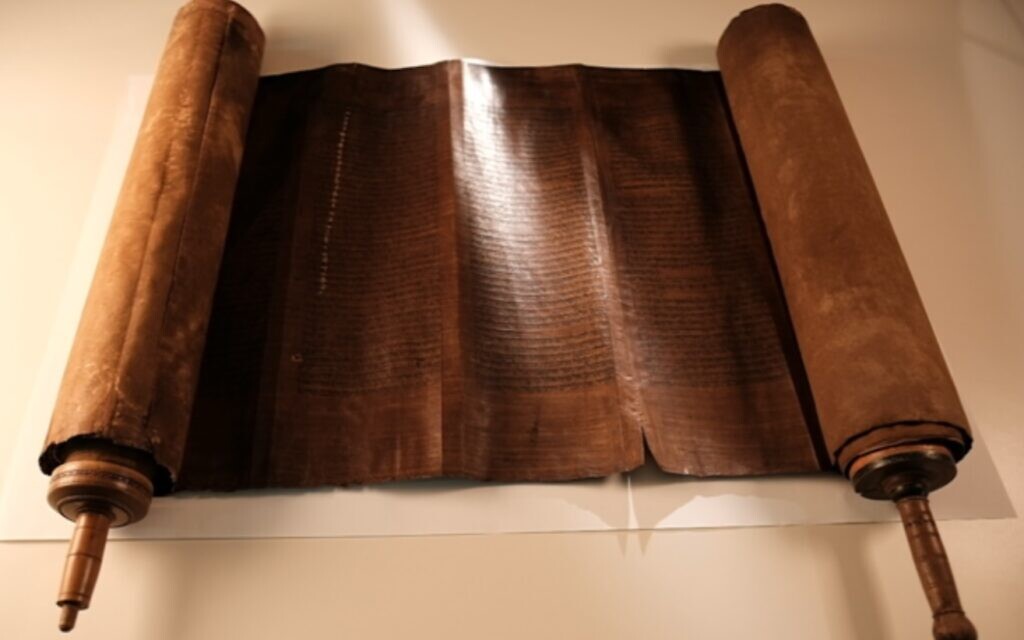 The National Library exhibits rare Torah scrolls, including a mufti saved from the Nazis

Audiences will be able to view videos of four ancient Torah scrolls — including fragments of a 1,000-year-old Yemeni scroll and others with notable background stories — just in time for the upcoming Jewish holiday of Shavuot, as part of a new initiative by the National Library of Israel.

Shavuot, the Jewish holiday celebrating the giving of the Torah, is observed this year from the evening of June 4 until nightfall the following day (with an additional day observed by many Jews outside Israel).

The Torah scrolls, which are not accessible to the public due to their delicate condition, were taken out of the library vaults for a few minutes to be filmed and photographed under the close supervision of conservation experts.

Items on display include the 1,000-year-old Yemeni scroll, fragments of which had been reused as raw material for bookbinding, where they were found; as well as one of the smallest readable Torah scrolls in the world, measuring just 6 centimeters (2 1/3 inches) in height.

According to the National Library, one of the scrolls is from the Greek island of Rhodes and was saved after being entrusted to a local mufti just before the Nazis deported the Jewish community.

Scholars believe that the “Torah of Rhodes” was written in Iberia in the 15th century and that Sephardic refugees brought it to the Greek island, where it was used for hundreds of years in the Kahal Shalom synagogue, now considered the oldest known synagogue in Greece.

Just days before the Nazis deported nearly all Jews from Rhodes in 1944, the scroll was smuggled out of the synagogue and placed in the custody of the local mufti, Sheikh Suleyman Kasiloglou.

The mufti is said to have hidden the Torah under the pulpit of a local mosque, and the scroll later survived the war, although the vast majority of Rhodes’ Jewish community did not.

The last scroll featured in the series is believed to belong to Saul Wahl, a prominent Jewish merchant and adviser to royalty who was said to have been King of Poland for a single day in the late 16th century, when the identity of the ruler’s successor precedent was debated.

The Saul Wahl Torah features ivory and horn staffs and is decorated with silver. It also comes with its own miniature sacred ark, with a doorway made from a 17th century Torah shield.

The NLI’s Haim and Solomon Judaica Collection includes Hebrew and Jewish books, journals, and magazines; thousands of Hebrew letter manuscripts and digital and microfilmed copies of some 90,000 of these manuscripts from collections around the world.

The entire NLI collection will soon move to the library’s new location, which is expected to open next to the Knesset in Jerusalem early next year.

You are a dedicated reader


We’re really glad you read X Articles from The Times of Israel over the past month.

That’s why we started The Times of Israel ten years ago – to provide discerning readers like you with must-read coverage of Israel and the Jewish world.

For just $6 a month, you can help support our quality journalism while benefiting from The Times of Israel WITHOUT ADVERTISINGas well as access Exclusive Content only available to members of the Times of Israel community.

Thanks,
David Horovitz, founding editor of The Times of Israel

Out of the Vault: Priceless Torah Scrolls Revealed in New Series from the National Library of Israel