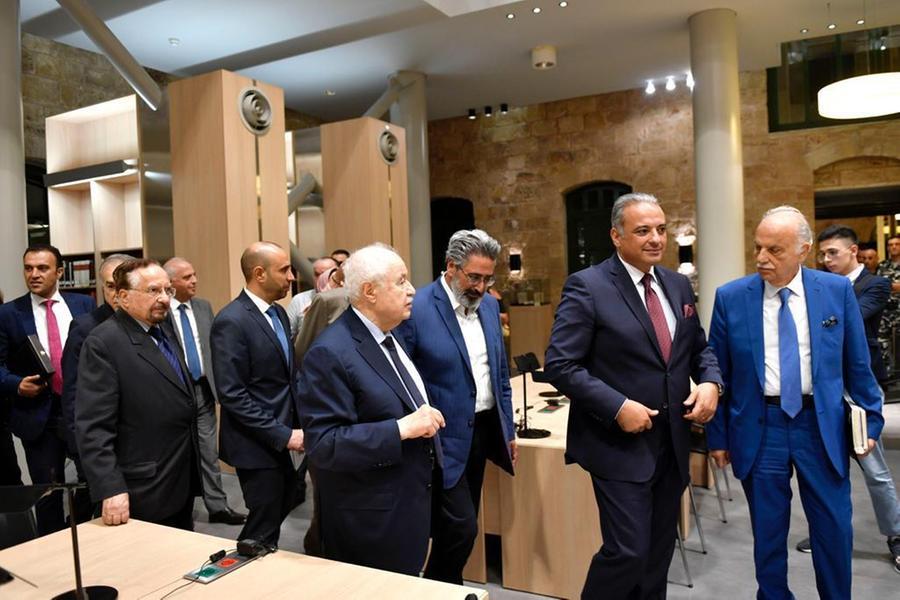 The National Library of Lebanon pays tribute to Dr. Abu-Ghazaleh

BEIRUT – Lebanese Minister of Culture, Judge Mohammed Wissam Al-Mourtada honored HE Dr. Talal Abu-Ghazaleh with the Ministry of Culture Shield, in recognition of his varied efforts and as a global Arab personality supporting innovation and reflection on technological development.

The ceremony of honor took place in the presence of the Lebanese Minister of Industry, HE Mr. George Boujikian, the Minister of Telecommunications, HE Mr. Johnny Corm, the former MP Essam Noman and the former President of the Higher Council of the judiciary, President Ghaleb Ghanem, as well as a host of high-ranking personalities. During the ceremony, Justice Al-Mourtada presented the Ministry of Culture shield to Dr. Abu-Ghazaleh as a sign of appreciation for his life journey which embodies the concepts of self-determination, hope and success.

Minister Al-Mourtada spoke about the different stages of Dr. Abu-Ghazaleh’s life and how he became a role model for the following generations: “Talal Abu-Ghazaleh’s name is synonymous with self-determination and success; a story whose chapters have clearly demonstrated how a vision can become an achievement when its holder has the will, the knowledge and the dedication; and how excellence develops from a story that is read or told, to an icon and an inspiration for others to follow. “

The minister went on to add that: “Talal Abu-Ghazaleh, from a child displaced from Palestine by Zionist gangs in 1948 to the founder and chairman of Talal Abu-Ghazaleh Global; the global organization of companies that provide professional services in the fields of accounting, management consulting, technology transfer, training, education, intellectual property, legal services, information, recruitment, translation, publishing and distribution.

Mr. Al-Mourtada reiterated that Dr. Abu-Ghazaleh’s life journey is the story of a long struggle during which he tirelessly sought to promote the culture of perseverance to achieve his goals, and the culture of relying on modern technological methods, attributed to his belief that “every era has its own tools and mechanisms”.

For his part, Dr. Abu-Ghazaleh thanked the Minister for the honor, reaffirming that Lebanon has a special place in his heart as he considers the Lebanese people as his own family which has embraced him from childhood until his degree from the American University of Beirut. .

He went over other parts of his own life stages, and how he entered the world of technology and developed this field, his work in the field of intellectual property, the global positions he has taken, as well as the suffering he experienced when he was only ten years old, as a Palestinian child who was displaced from his own homeland.

Dr Abu-Ghazaleh addressed the people of Lebanon saying, “Your suffering is a blessing from God for which you must thank Him, for it will bring out the best in you and you will emerge victorious from your crisis, but, the la only thing you need to do is be patient and trust your abilities.

At the end of the honor ceremony, the participants visited the different sections of the library and were informed about rare and precious books, old magazines and manuscripts.