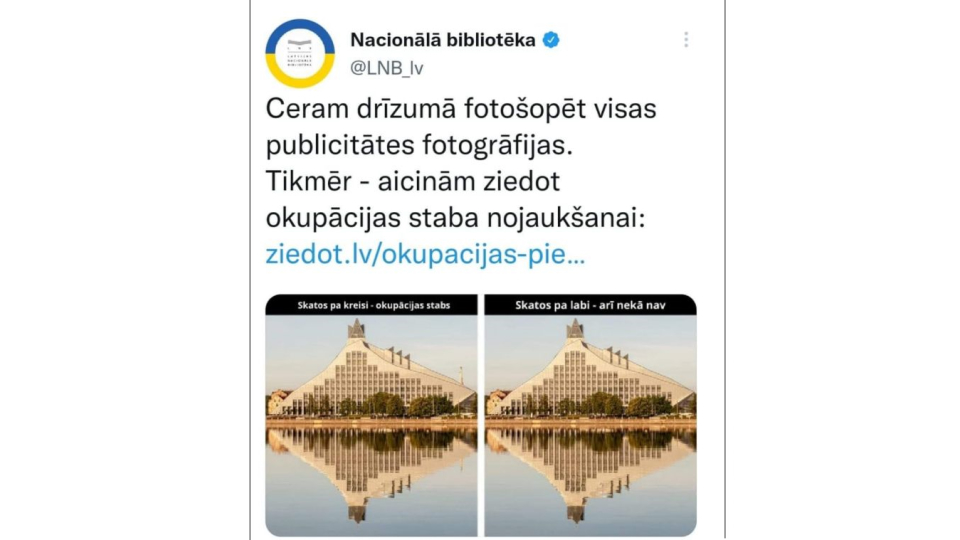 The LNB posted a tweet on May 12 saying they hope to photoshop all the publicity photos soon and invite donations for the demolition of the “pole of occupation”.

Expert opinions differ on whether it is right for an institution that should be politically neutral to do so.

Library spokesman Augusts Zilberts thinks that’s fair. This shows the attitude and solidarity of the institution, he said.

“Furthermore, as a library, we hope and support that the monument will be demolished. And the photos – yes, we’re really going to edit them to remove the redundant object in the Rīga panorama. It is symbolically linked to enormous human suffering and to a power incompatible with an independent European democracy. And it is not uncommon for institutions, or its libraries, museums or archives, in Europe to also express their position on what is happening in society and in the country,” the library representative said.

Communication expert, researcher and lecturer at the University of Latvia Līva Kalnača said that an image like this on social media would not be outrageous, but it would not be advisable to change all the Pictures.

“If we’re talking now about changing publicity material before anything happens, I think that’s a definite ‘no.’ Because it really changes history, and it would be totally unfair for them, as an institution charged with preserving history, to do so. I see it as a joke, as a way to communicate about the event in the spotlight, but that real actions would follow at this time, I think that should not happen, ”said the researcher.

On the other hand, Vita Zelče, professor of communication sciences at the University of Latvia, calls the approach a “modeling of the future you want”. This signal is particularly serious from an institution that is an important cultural heritage institution.

“There has always been such an ideological contradiction here, because the national library is for us the symbol of the Castle of Light – of many intellectual and cultural values. And next to them is a monument that symbolizes occupation, violence. Well, those are two difficult symbols to match,” the professor said.

Zelče thinks that the Pardaugava monument should also leave the library landscape in reality, but it would not be right to hand it over to the Russian Federation or to destroy it, because anyway, it is part of the cultural history. However, monuments that do not embody or conflict with the values ​​of Latvian and European sovereignty should not be displayed to the public. Therefore, it would be very important to find a suitable storage site.

Did you see an error?