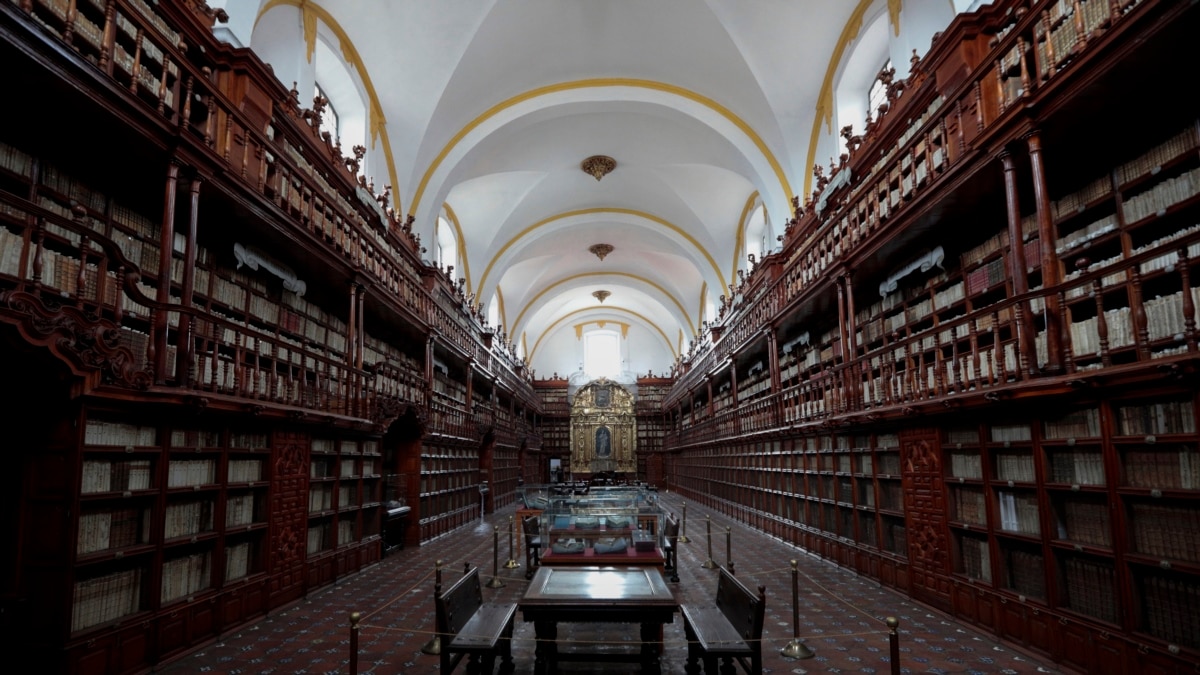 The oldest public library in the Americas has Catholic origins

It is, according to UNESCO, the oldest public library in the Americas, tucked away from the street in a cultural center in the historic heart of this Mexican city. Those entering the Palafoxiana Library for the first time – upon seeing the high vaulted ceiling and the gold-framed painting of the Virgin Mary – might think they have arrived at a chapel.

Indeed, the library owes its existence to one of the first Catholic bishops of Puebla, Juan de Palafox y Mendoza, who in 1646 donated his private library of 5,000 volumes to a local religious college – in the hope that anyone who can read would have access to them.

In 1773, more than a century after Palafox’s death, the then bishop ordered the construction of a stately library to house the collection. The walls were fitted with two rows of wooden shelves; a third tier was added in the 19th century as donations poured in from religious leaders and lay people. Today there are more than 45,000 volumes and manuscripts.

The books are organized according to the tenets of scholastic philosophy that the foundation of all knowledge is God and reason is subordinate to faith.

On the first floor, there are more than 11,000 bibles, religious documents and theological texts. The second level is devoted to the relationship between God and men — chronicles of religious orders and lives of saints — and the third contains books on physics, mathematics, botany, language, architecture, even carpentry. .

Indeed, the global collection navigates between two worlds — the word of God coexisting with the contributions of humanity.

“Everything that was imagined at the time is in the library,” said Juan Fernández del Campo, the current director of the library.

Among the library’s greatest treasures are nine incunabula – books made between 1450 and 1500 with Gutenberg’s early printing techniques – and volumes by Galen and Vesalius, renowned for their contributions to the study of medicine.

Inside the library there are no explanatory texts that reveal the enigmas of the Palafoxiana to its visitors, but at the entrance there are always volunteer guides who tell its story to anyone who is interested. Fernández del Campo said access to documents often takes priority for researchers who present a clear rationale for their request.

Palafox’s passion for books is evident in a quote from him, written on a mosaic outside the library.

Still, Fernández del Campo, from an office hidden behind the altar of the Virgin out of sight of tourists, said these words of the bishop should be interpreted in the context of his time.

“If you read what Palafox said and look back in the history of Mexico, you say: wait a minute, no. This was not the time for Mexico to raise its wings to freedom of thought “said the director of the library.

Indeed, historical records suggest that Palafox sought to assert the authority of the King of Spain and the hierarchy of the Catholic Church, putting him at odds with religious orders such as the Jesuits who questioned the royal authority.

Amid these frictions, Palafox was transferred to Spain in 1653. The Jesuits were expelled from the Spanish Empire a century later; many of their books were added to the Palafox collection when the order abandoned Puebla.

According to the World Monuments Fund, the extra weight of the books stored on the third level of the library made the shelves more susceptible to damage during the earthquakes that hit Puebla in 1999.

Following the earthquakes, the fund took part in a vast restoration project. The cracks in the walls and the vaults were repaired and the libraries were restructured.

The library reopened in 2002; two years later, it was added by UNESCO to its Memory of the World Register.