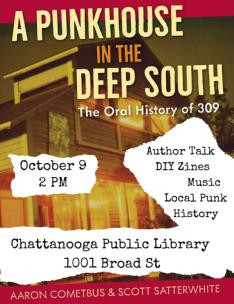 Authors Aaron Cometbus and Scott Satterwhite present their book A Punkhouse in the Deep South: The Oral History of 309 at the Chattanooga Public Library on Saturday.

Using interviews with students collected before the pandemic, A Punkhouse in the Deep South (University Press of Florida) describes the life of a Pensacola punk rock community living in one of the oldest punkhouses in the country – 309. Mr. Cometbus and Mr. Satterwhite’s presentation will offer insight into the origins of the house and the punks who made the house a home, while also creating everything from music to art, and even a few businesses. .

The library welcomes authors to its downtown plaza with music, a zine-making workshop, and a display of leaflets from the Chattanooga punk community, which are kept in the local history and genealogy department of the library. The event, open to all ages, starts at 2 p.m., with the authors’ presentation at 4 p.m.

Told in personal interviews, it is the collective story of a punk community in an unlikely town and region, a center of radical counterculture that has drawn artists and musicians from across the conservative South and gained a national fame.

The 309 6th Avenue home has long been a hub for punk rock, activism, veganism, and queer culture in Pensacola, a quiet Gulf Coast town on the Florida-Alabama border. In this book, the inhabitants of 309 recount the colorful and often comical details of community life in the overcrowded and dilapidated house during its 30 years of existence. Terry Johnson, Ryan “Rymodee” Modee, Gloria Diaz, Skott Cowgill and others say they performed in bands such as This Bike Is a Pipe Bomb, operated local businesses such as End of the Line Cafe, formed support groups feminists and created zines and art.

Each voice adds to the image of a vibrant community that has worked together to provide for its own needs while having a positive and lasting impact on its environment. Together, these participants show that punk is more than music and teenage rebellion. It’s about alternatives to standard life stories, accepting the marginalized in a rapidly changing world, and building a sense of family from the ground up.

Including photos by Cynthia Connolly and Mike Brodie, A Punkhouse in the Deep South illuminates many individual lives and creative endeavors that have found a home and thrived in one of the oldest permanently inhabited punkhouses in the United States.