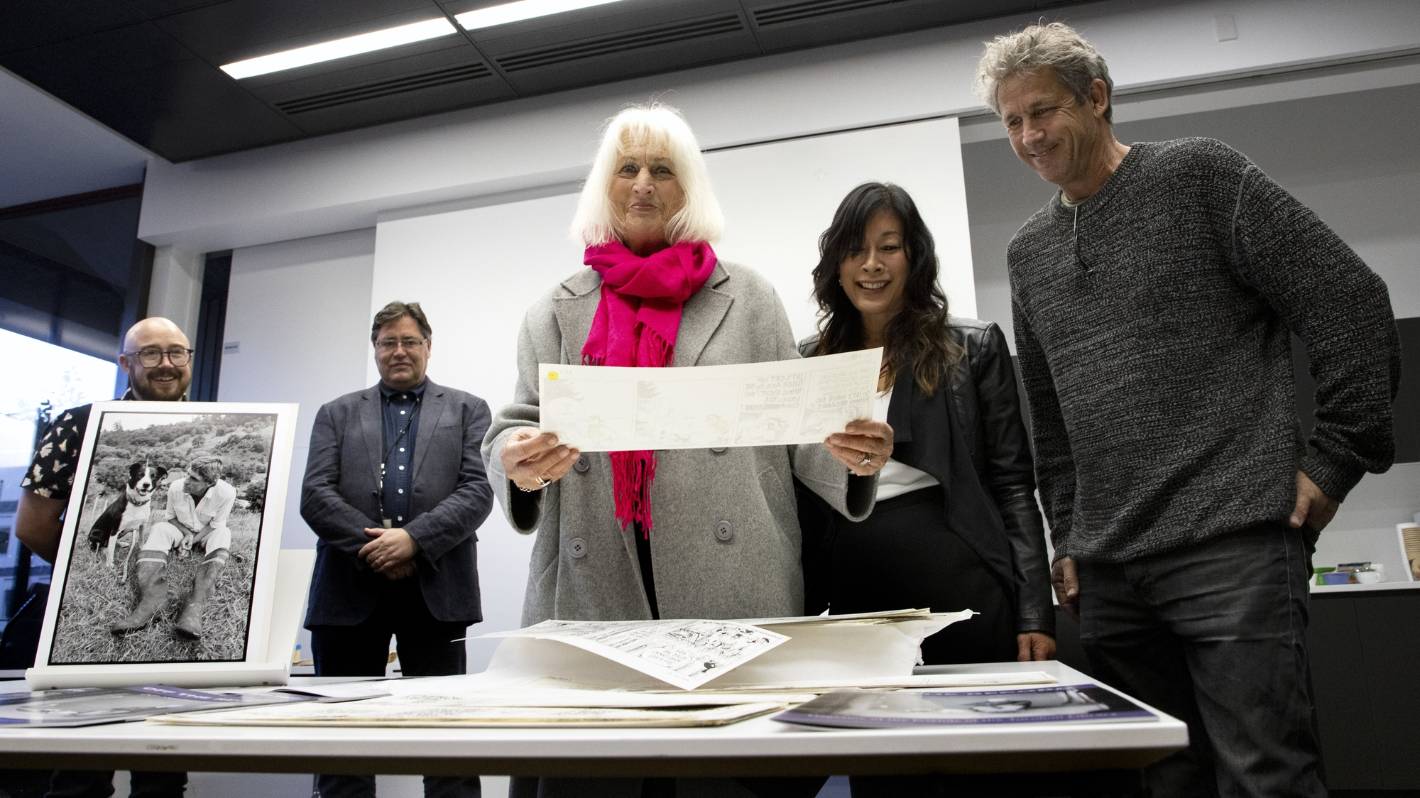 Pam Ball (centre) with her daughter Tanya Fowell and son Gareth Ball (right) with the comics that were received on behalf of the library by Sam Orchard (rear left), assistant curator for cartoons and strips drawings, and Oliver Stead, curator for drawing, painting, prints.

Five thousand Footrot Flats comics were donated to the National Library by the family of the late cartoonist Murray Ball.

On Friday, 50 carefully wrapped packages containing 100 comics, all chronologically listed from 1976 to the 2000s, were officially turned over to the Cartoon and Comic Book Archive.

The collection of comics, read and loved around the world for decades, began after the first comic appeared in The evening mail in 1976.

For almost 20 years they appeared in over 2000 newspapers across New Zealand, Australia and the world.

The comics’ popularity has led to over 40 books, merchandise, a musical, an amusement park, statues and New Zealand’s first animated feature Footrot Flats: The Dog’s Tail, which made Ball a familiar name.

He was made an Officer of the New Zealand Order of Merit in 2002 and died in 2017 aged 78, after suffering from Alzheimer’s disease for a time.

After Ball’s death, his son, Gareth Ball, digitized and uploaded his father’s work online, to be enjoyed widely for free.

“We had the whole body of his work, not just Footrot Flats, to sort through. I brought an A3 scanner and started scanning it,” he said.

“It’s another way for people to access it, which is important to us.”

“Once that was done, we didn’t really need the originals anymore and just knowing they’re safe is really important.”

The National Library’s assistant curator of cartoons and comics, Sam Orchard, said the scope of Ball’s work was a major reason for the expansion of the cartoon archive at the library in 2019.

“This recognized the role comics have played in documenting New Zealand histories and lives, and the archive now contains comics (such as Footrot Flats) as well as graphic novels, webcomics and comics. “wrote Orchard in Off The Record, the magazine. from the Friends of Turnbull library.

“It’s a real pleasure for me as a draftsman to see Murray’s work in paper form and to see the literal lines he made on paper,” he told the Ball family during a small ceremony on Friday, where they signed the deed to donate the comics.

“The love and care that you obviously put into taking care of these precious items and putting them in order… We are so thrilled to be looking after them forever,” he said.